We’ve all got a file, a little page in Siv’s ledger (she keeps hard-copy records in dull composite box-files in our “headquarters”, such as it is). In it she keeps track of our service record, our lives and deaths on the battlefield real or simulated.

Sadly my record is unspectacular; since my initial fit of competence I’ve spent a lot of time bruised, broken-boned and doused in neon paint, almost to the point it looks like I’m shirking work with injuries. I am becoming good friends with my team’s medic, Yuko. She’s a slight, dark-skinned woman with deep turquoise-y hair and a look of adorable disapproval every time I’m thrown in front of her. In fact, I’m currently writing this from the sick bay; last training exercise saw me crack a rib as a drone punched me. Given a D-type drone has about the CQC prowess of a street-sweeper droid that’s quite an achievement, according to Siv. The sick bay is a prefab unit in our little compound on the edge of a Geon plant, two blocks connected by a short corridor. One half is “Recuperation”, where two or three (at a push) soldiers can be treated for minor injuries. The other half is “Surgery”, where I’ve never been. I don’t think I’ve seen anyone go for surgery.

From my bed, I watch Yuko typing the latest entry in my medical records to send to Siv. I’m tanked on painkillers and the world is kind of swimming. She listens to staticky, sinister electronic music when I’m not asleep, the singers droning on in one of the Asian bloc languages, and that’s just the pervasive noise I’m used to under the blue light of the crate.

“You’re fit enough to leave.” That comes out of nowhere. I still feel like an asthmatic having a fit whenever I move, I’m in no position to fire a gun, but I’m fit enough to leave. “Stay until your evening meal, then be gone before curfew.” Her voice is slightly accented, an Osakan burr that’s all but naturalised into the bland melange of city-dialects. “And I swear I want to see less of you in future.”

Curfew comes and I’m on guard duty. The painkillers have worn off – mercifully the nauseous dullness of sense but – and this is less welcome – also the dulling of the pain in my ribs. Ren, one of the other grunts, is leaning against the other edge of the barricade we’re manning, reading a magazine on his slate.

“You ever thought about them Nekos from Akibahara?” I’ve thought about them a bit. Nekos are the acceptable face of bio-engineering, the sorts of cute things Geon likes to point at as being their friendly, consumer side. Girls a bit too into their delusions of moe who gather up their yen-coins and head to a Geon surgeon to get cat-ears and a tail. Such a thing rings a bit hollow for me; I’ve seen Geon’s real pride and joy in the flesh. Correctors, security bio-soldiers who in time will probably obsolete even the droids and PMCs. “I think I’d date one.” Ren seems to have a one-track mind.

“A lot of them are apparently in anti-corp movements, Ren. You wouldn’t stand a chance.” The irony isn’t lost on me. Showing their support for Geon, walking ads for bio-engineering, but still apparently anti-corp.

“Having fun, children?” Siv has emerged from the rickety tower of containers and prefabs that makes up our proper HQ, and is letting her machine gun hang like an afterthought from her shoulder. “Think I’d look good with cat-ears?”

I don’t say anything.

“You’ve been picked for tomorrow’s large-squad action test. Try and make it to the end this time, K.”

We’re in a dense forest of buildings. My back is covered by a sniper and I’ve got a comrade on the balcony above me. That said, I’m really not sure how much use any of them will be; visibility is basically the other side of the street and that’s it.

I dash across the street, feeling the ground heavy and gravelly under my boots, and throw myself against the facing wall to hear sniper bullets ping into the space where I was standing. I hear L on her perch fire, a firefight I’m not privy to as sniper shots are met by the clatter of machine-gun rounds across the darkness. L reloads and fires again and suddenly I hear my radio hiss into life. “Enemy officer down. Sniper detected, remain in cover.” 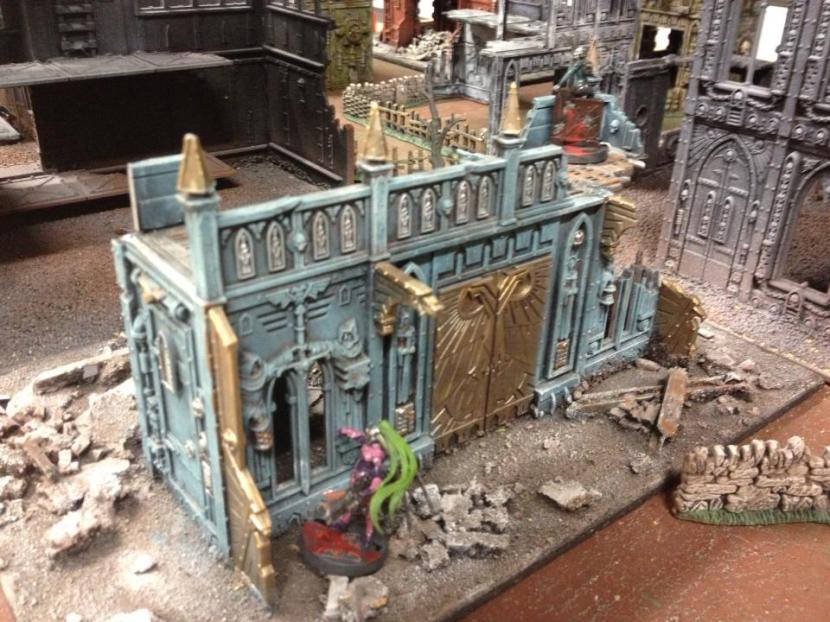 I’m about to update the others – I’ve got two juniors, new recruits fresh like I barely am not, waiting on my every word – when there’s another double-snap, and L’s lifesigns go “dead.” I’ve lost half my covering fire and so it is time to change the parameters. I call for drone support, and from the tiltrotor far above I hear something drop heavily, arrester-pack breaking its fall.

“G-Type Drone Online. Targets Detected.” Rifle fire pings around its drop point, but it is well-entrenched for now. Yet again, before I can even co-ordinate new orders for it, it drops dead. An enemy soldier has emerged from the maze of walls and cut it down before it could finish scanning the area. Panicking now – for I’ve lost L, and my precious heavy-weapon G-type – I call for the other drone to support me. The enemy are wary, waiting for more airdrops, and it is again ambushed immediately after landing. It does manage, it seems, to kill one of the enemy’s number, but currently the balance is two of theirs to two of mine, with the G-type isolated, and that is not a good situation.

An enemy drone smashes into a balcony high above me, and I hear one of my subordinates open fire to no effect. It’s quickly followed by another, landing somewhere I can’t quite see from my hiding-place.

My surviving G-type opens up at the enemy’s drones, but I hear bullets hit concrete not metal skin.

The radio bursts into life again, it’s one of the other soldiers, pinned in an outbuilding and screaming for me to help. I don’t know what to do; the sniper is covering every exit from my position, there are drones patrolling the rooftops, and I’m listening to my squad die one by one. I don’t even know their names. Is this Ai? It’s hard to be reassuring as heavy machine gun rounds chew up her cover and then the signal dies.

I edge forward, trying to do something about the sniper, and watch the one surviving drone fall silent and my support drop shortly afterwards, “dying” out of sight, alone and afraid. I am alone. Concentrating entirely on keeping myself in cover from the sniper and the heavy weapons of the drone behind me, I don’t notice the second drone move up behind me.

Paint smears across my back and my visor flashes up YOU DIED.

Thankfully I’m not visiting Yuko again; I don’t think she could take another injury to set. I’m just nursing my shame in the mess hall, an old staff canteen from Geon’s previous employee facilities where the food is greasy and plentiful and there’s coffee all hours.

P – Pai, my opposite number in the exercise, sits next to me. Her armour took most of the hits but there’s a lime-green streak down her face like a radioactive battle-scar.

“Losing.” She looks genuinely interested, and I can’t answer instantly. “I mean, it’s going to happen, right, when we hit the battlefield for real. That moment when the bullets are really knocking us down, when there’s no hope. How’s it feel?”

“Awful.” Knowing L, and Ai, and the others will all just wash their deaths off in a cold communal shower softened it a bit, but it was still a horrible empty feeling to know I was all alone and I’d failed them. I don’t think Pai will really understand, though, so I don’t elaborate.