There are quite a few comedy fantasy anime in the vein of The Slayers and, unfortunately, most of them are varying degrees of quite sexist. Even The Slayers has some episodes that really don’t hold up as very good, although it also has some extremely funny episodes and some action scenes that work quite well. There are certain tropes that come through in a number of the series in this vein that, depending on execution, feel a little awkward; lots of cross-dressing, lots of jokes where the punchline is pretty much “man tries to spy on woman and gets punched” and so on. The execution varies for better or worse, but nevertheless it seems this sort of adolescent humour is a recurring theme and it’s wholly understandable that that might not appeal to people so much. Konosuba goes perhaps even further by having a masochist-fetish defender and various other more direct sex jokes. 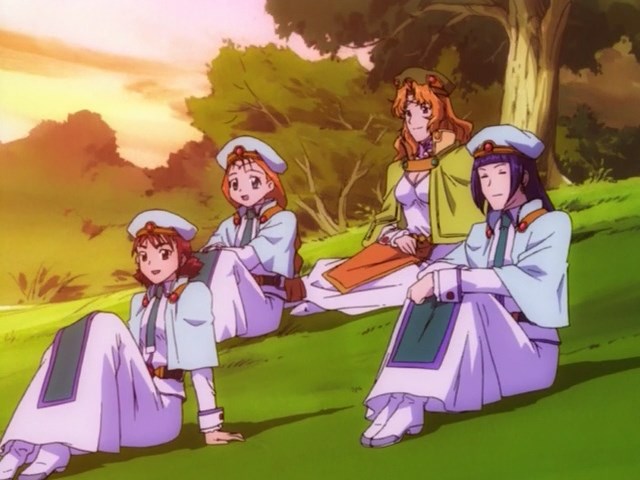 I still broadly think I’d recommend The Slayers; it is for all accounts significantly better in its execution, even when the subject matter is a little wearying, than most of its competitors. I’d probably even more wholeheartedly recommend the much more wholesome Magic Knight Rayearth, although it, in the vein of some of the other fantasy-robot (and sometimes isekai) stories, is a little dull in places. Then there’s Wataru, which in aiming for younger audiences eschews pervert jokes and replaces them with absolutely horrifically bad puns. Urban fantasy gets in on it too with Ghost Sweeper Mikami, which is basically Golden Boy but with ghosts. (And, at the very worst example, there’s that one Ramune OVA which I will not discuss). 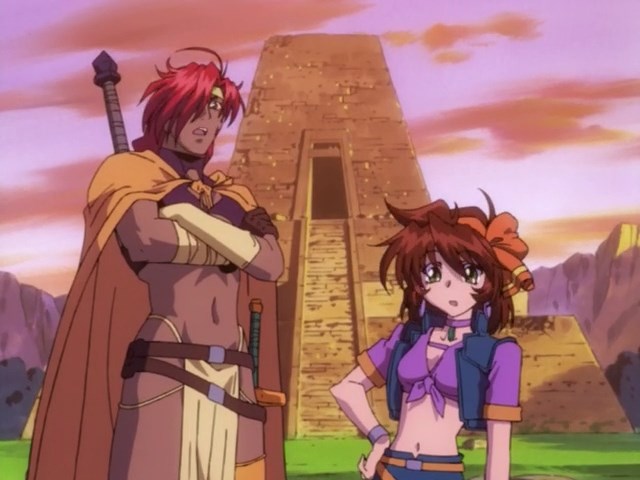 All this leads into the true meat of this article, Rune Soldier Louie. Which is, on the surface, yet another vaguely risque fantasy anime. The hero, a permanently broke, often drunk lecherous student mage accidentally ends up the subject of a prophecy after trying to sneak into a convent to pursue a beautiful nun. As a result he ends up the sole man in an otherwise all-female adventuring band comprising a woman for all tastes (short, hyperactive rogue, busty and buff fighter, demure and extremely fed up cleric) and there are many comically misconstrued adventures to be had. Often involving other beautiful women he singularly fails to pursue. Sometimes involving the weirdly perverted high priestess whose running joke is convincing her ward to sleep with the hero despite her hating him. Assume a level of maturity here that begins at City Hunter. 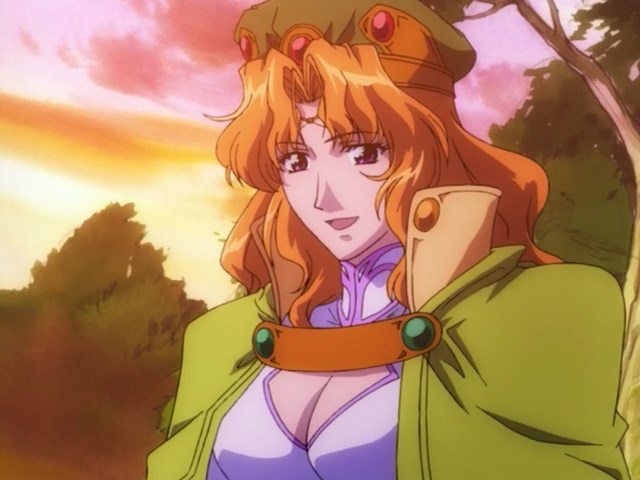 And yet, despite the low-hanging fruit jokes, there’s an occasional sincerity to the series that makes it on the better end of the spectrum of incredibly stupid fantasy anime. To set this in context; one of the things that makes Ryo in City Hunter significantly more bearable than, say, Tadao in Mikami is he has standards and a personality beyond wanting to get laid. The series’ writing knows when to downplay Ryo’s lust and buffoonery, and present him as the action hero he can be. And it knows that the women he surrounds himself with should be more credible characters than simple caricatures for the hyperactive male to bounce off. There’s a similar aspect to Louie and it plays out in some weirdly wholesome episodes for a show prominently featuring a massive-in-all-aspects warrior woman in a chainmail bikini. Not every episode is about our idiot hero trying to pursue a woman. Indeed, there are a good number of episodes focusing (often in no less lighthearted fashion than anything else) on the large cast of women. I’d go so far as to say because the setup is a single man getting forced upon an all-female group there’s that need to give the women some personality and characterisation to avoid it becoming samey caricature within one episode.

This Animenewsnetwork interview with Ryo Mizuno and Yurika Tsukita is a good look into what might make this series so good.

I was surprised to find out the series is from the same writer, Ryo Mizuno, as the much more serious fantasy anime Record of Lodoss War. What is more, the stories are set in the same setting alongside Legend of Crystania. I was equally surprised to find out the soundtrack is by Kawai Kenji, who also notably wrote the music for the Patlabor movie, Ghost in the Shell and Gundam 00 among other things. Clearly Louie has a surprising amount of talent behind it (for those interested in voice actor connections, the main character’s voice actor is Katsuyashi Konishi – the voice of Kamina, Volfogg and Ozma Lee, while Melissa’s voice actor is Kikuko Inoue – the voice of Grace O’Connor, Electra from Nadia and Belldandy). And if anything, Mizuno’s familiarity with roleplaying games and fantasy fiction shows through; it is quite an able fantasy parody, strengthened for being set in an already extremely developed setting. While it is clearly made out of the trappings and aesthetics of tabletop RPGs, there is also a strong influence of non-game fiction in there which is – in comparison to the relatively large number of fantasy anime that work explicitly on game logic – a good differentiating factor. 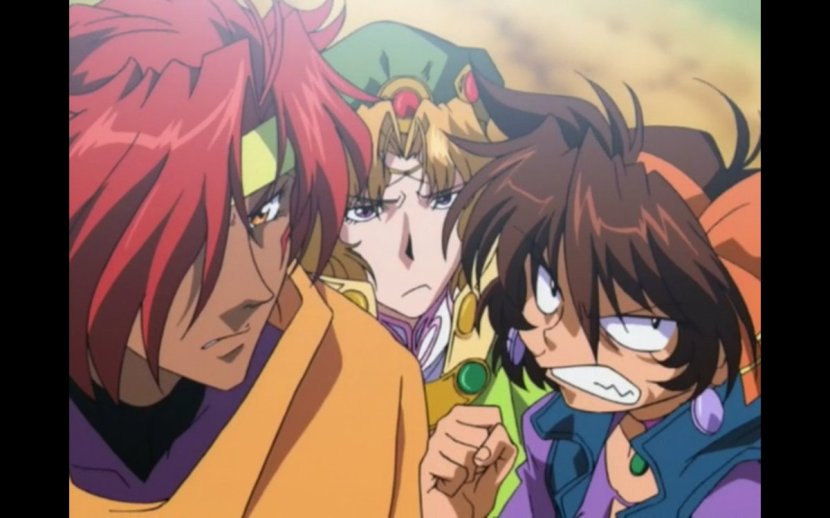 Before it seems like this is nothing but a cheap jab at popular modern isekai stories, the same criticisms can absolutely be levelled at Wataru and Ryu Knight, which absolutely foreground game logic (Wataru having the hero have to fight seven “level bosses” to ascend to the top of a mountain). But my point stands, I think, that a fantasy parody coming from someone with extensive knowledge of the fantasy genre from various sources, who both plays and knows RPGs as well as other media, and who has clearly much passion for world-building is going to be a well-informed and well-grounded parody. Parody that does not come from love of the thing being mocked is often at best insincere and at worse generally patronising. 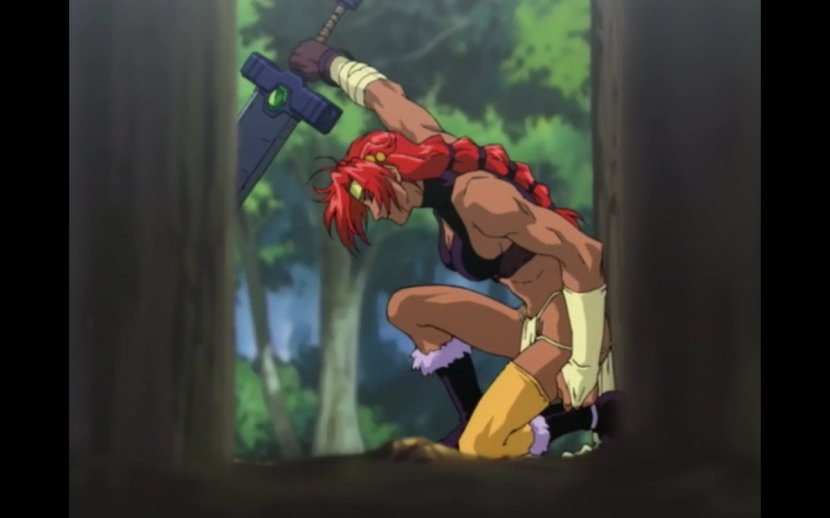 So, returning to Louie specifically – what makes it wholesome? That’s a strange word especially given how thirsty the series art can be. Well there are two episodes that particularly come to mind that felt particularly good, both funny and also distanced from the usual hyperactive battle of the sexes stuff. A relatively low-key story about the heroes trying to help an old woman see her favourite flower has a sweet ending where they all do the right thing for the grandmother and granddaughter (leading to a pretty good payoff for a running gag about a loose snake), while the resolution of a My Fair Lady-esque story about the party rogue being confused for a servant-girl who is the object of a nobleman’s love is cute and again has the heroes doing the wrong things for the right reasons. 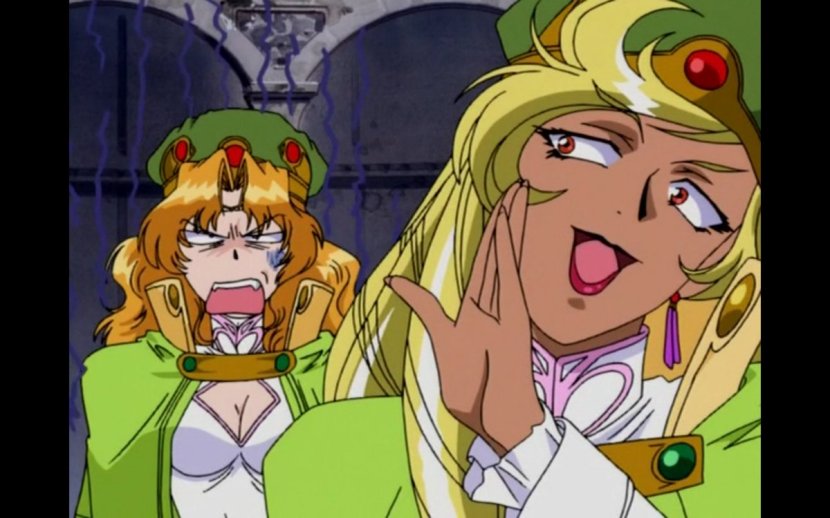 In having a cleric front and centre in your fantasy comedy party, and not having her be the no-fun-allowed figure but instead the exasperated mentor, cat herder and moral compass, you end up with a situation rather like City Hunter; the man might be lusty and idiotic, but what happens usually ends up with something good happening. Plus, the series continually pokes fun at Prince Charming figures in a procession of often quite amusing sequences. 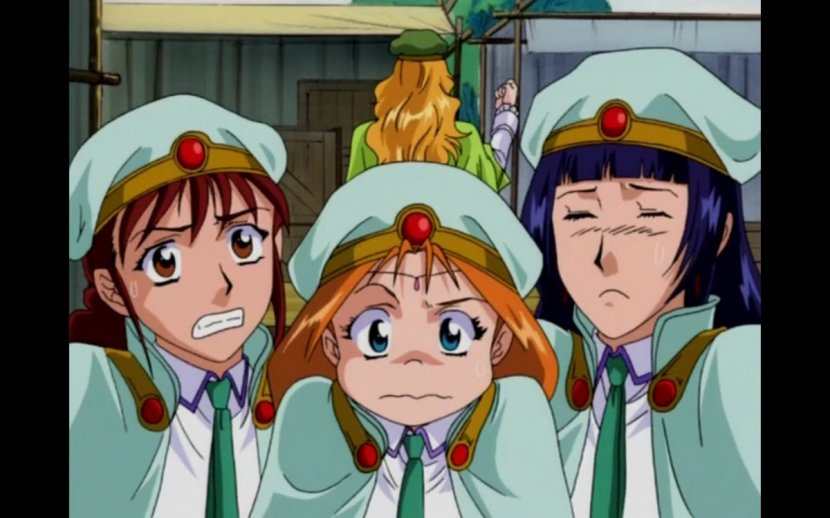 Make no mistake, Louie is quite a thirsty show, and probably features some risque humour that won’t appeal to everyone. But I’d say of the massive amounts of samey fantasy comedies its humour is often on point, it generally has a kind of warm fuzzy comfiness to it and there is some good talent in the genre backing all this. If you don’t mind the adolescent humour of that very specific kind of comedy anime, if you want some extremely good facial expressions and some often predictable but still amusing gags, give it a shot.