Any finale for Rahxephon would, after the revelations of the ending arc, be a personal rather than action-filled one. There is no sense of a war any more; humanity is annihilated and forsaken, Ayato has had his chance to embody the machine, to become the saviour of humanity, and turned away from it. It is hard to say this is turning away from a duty, because what duty did he have at this point? He is a Mulian, he has been all but rejected and used by humanity, and so it is almost inevitable he would not seek to be their saviour. So, the conflict that remains is between what remains emotionally of Ayato, what human touch he picked up in his life on Earth, and the insecurities which fuelled his sudden abandonment of Haruka and Megumi. He took action, but it was action with unknown, uncertain consequence – and now almost limitless power is in the hands of someone who does not know where he belongs or what he should do with it. 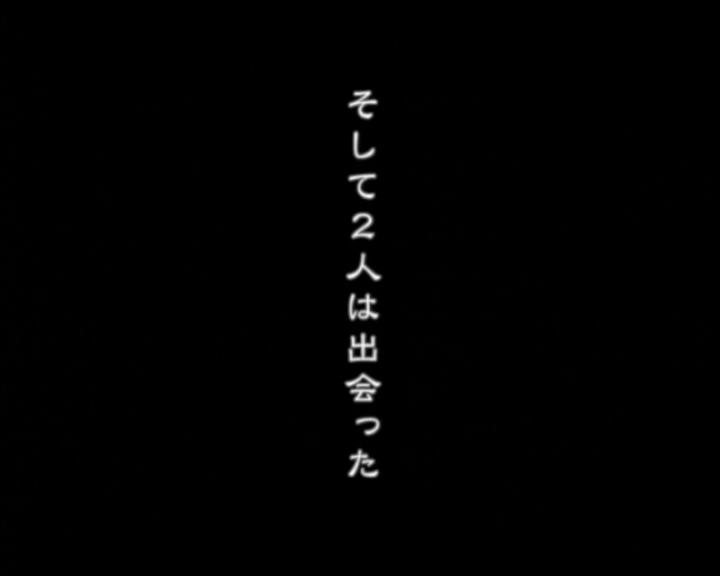 Thus the episode begins with Ayato in crisis. He is sealed away in a private dream-world, in an immobile Rahxephon, oblivious to the people on the ground who did care for him and for whom getting him back is the only “victory” that could possibly remain. Haruka finds her determination and sets off to save him – her own moment of rash defiance evoking, in a scene that will come later, her trying to “save” him from the Mu back at the start of the series. Back inside the dream (this episode uses a letterboxed aspect ratio much as the previous dream-sequence used varying picture dimensions to show the distance from reality), Ayato is now questioning his own resolve. He acted unpredictably, but now has to accept consequence. He claims “no-one knows me, and I don’t know anyone” as he ends up with his only “friend” in the world – his fated partner in godhood, Quan. Quan, in return, claims “you pretend not to see to avoid knowing” – turning his perception of himself as an abused outsider into a self-perpetuating coldness that fails to see people trying to help. It is an intervention. Quan is, in this instant and throughout the episode, a cold hard conscience to try and break him out of “the cage [he] created.” The emphasis is on making him realise he is not alone, never has been alone, and that while people might be flawed they are still, in some way, there for him. Eventually he sees this, claiming “I was afraid of knowing, so I ran away.”

This is a redemptive episode, it is Ayato put on trial and forced to change – and to make this clear it sets this introspection against the epilogues for all the other characters. The last few survivors of the conspiracy story kill each other off futilely until only Futagami and Bahbem remain, and after Bahbem describes how – contrary to all evidence – things are proceeding as part of his plan Futagami kills him. Rahxephon is not now, and I would argue never has been, a story about scientific hubris in the vein of Ideon or even a story about someone breaking and being redeemed in quite the same way as Evangelion. Ayato is not broken in the way Shinji is and he is not redeemed in the way Shinji is. The Rahxephon’s escape from human control is not the same as the Ide’s curious machinations – it is simply power that has been contained and vaguely used being handed unrestrained to someone at their lowest point, as opposed to a malevolent intelligence utilising others. Any hint that this is a story about Ayato’s successful manipulation is removed by the utter defeat of TERRA, the failure of the entire conspiracy, Bahbem’s inglorious death and Ayato in one shot – when his god-Rahxephon finally acts – killing Haruka and Maya. It is a story about the world being reduced down in a sea of blood to two people, one trying to help the other. Only by removing everything, all hope, all outside influence, and then bringing it back suddenly, can this intervention succeed. Ayato has to begin to doubt himself, and then be pushed over the edge. 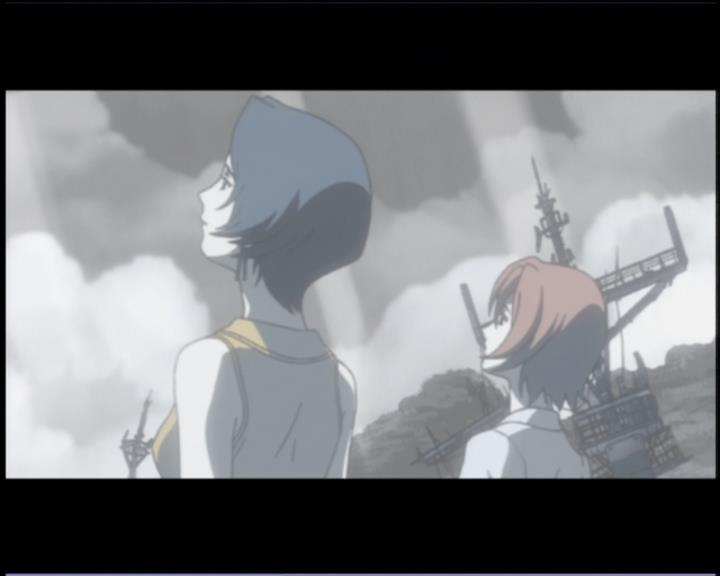 This happens in the form of a phone call from Megumi, followed by Asahina and Elvy and Souichi – and images of Haruka being shown to him. He is being shown that while he convinced himself nobody could be trusted, because some people could not be trusted, there were those who were if not blameless less actively hostile – and those people were the ones whose loss motivated him to this anger. Quan is, arguably, sympathetic to his losses – yet using those losses to show that his reaction to them was counterproductive. He has to know what potential there is in the world for the next phase of his redemption to occur – the true ascension to godhood. His last words before this moment are “I found myself,” – and that is enough to bring the series to its conclusion. He has been taught what the world has to offer for him, and now given the opportunity to fix it. 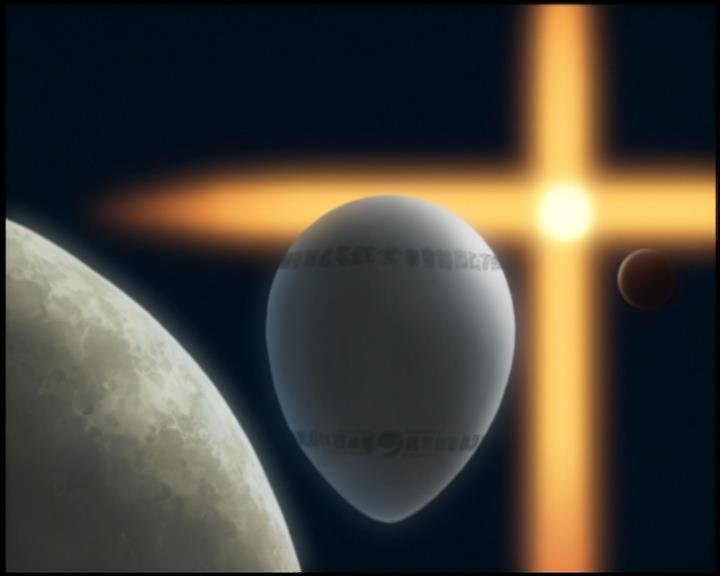 Here it is worth considering Evangelion‘s handling of what are, in honesty, similar themes. Its final scene begins with Shinji considering that he, too, can form his own world and being told by everyone that he must do this. The recurring theme is perspective and perception – that Shinji must create a world that is good for him. Fuyutsuki claims “Your truth can be changed simply by the way you accept it” – and an analogy of how one perceives the weather versus how one can act on a rainy day presents it almost as a simple pep talk. Shinji has to, effectively, buck up and be the change he wants to see. When Gendo claims he is “unused to what it is like to be liked by others” it is worth noting this is the line of argument Quan begins with – Shinji’s claims that “the others hate me” are, effectively, Ayato’s claims that he was “afraid of knowing” and actively sought isolation. Shinji is told the fact he “hates himself” is why he “cannot love” – and here is where Ayato’s redemption is different. Ayato’s crisis is not as simple as a lack of confidence, it is the culmination of an erosion of his trust and an inability to come to terms with grief that comes from the pressures of those trying to use him for their own agenda. He spends much of the series not trying to run away from responsibility but seek agency, stand up for himself and not be used or exploited. He begins by wanting to trust and is betrayed, as opposed to beginning a recluse and becoming more reclusive. Shinji and Ayato’s last words before they break the world are similar – “My life is worth living” versus “I found myself” – but the context is fascinatingly different. Rahxephon is a story about Ayato’s effective decline into an almost petulant rejection of everyone, even those who cared for him. Evangelion is a story about someone starting at rock bottom and being given minimal chance to improve.

It is perhaps because of that the two absolute final scenes differ so much. Evangelion builds to everyone applauding Shinji for finally realising he can function as a person, overcoming his neuroses and confidence issues and finally surrounding himself with friends. Rahxephon has Ayato physically destroy the Earth and reshape it from a more enlightened perspective, rewriting his entire life and the lives of everyone he knows to give them happiness. It does not have the motivational speaker-ness of everyone saying “congratulations,” it is a straight fast-forward to the typical epilogue of a super-robot anime. Ayato is now living married to Haruka with his daughter Quan, attending the school reunion of Asahina and Mamoru. He is an accomplished artist and academic in a peaceful world where Tokyo is not trapped under alien rule – and, as the very final scene shows, the girl who throughout the series was always Reika, the guide to his fate, is now Haruka. Ayato “wins” the war against the Mu, the fight to protect the smiles of those he holds dear, but his final battle is shown in this episode to be one fought against himself. He took the power to win the war in episode 25, and this episode is him learning how he must use it.

This process, of writing episodic blog posts for Rahxephon, has made me consider the series – and, perversely, Evangelion and many other anime, far more closely that I ever would have before. I went past thinking about whether or not I liked the series, how it stood as a piece of science-fiction, and set out to look at it as a piece of televised fiction. I tried to pay attention to its visual language, its allusions to other series, its symbolism – and tie them in to its story, which I feel I understood all the better for it. It has been a tremendous experience, and now what remains is to continue to process with the final episodes of Eureka Seven – a project which my general lack of free time has sadly put on hold for several months.

I hope these articles both communicated what I love about Rahxephon and what it does well – giving hopefully fresh insights to people familiar with it, but also, maybe, convinced someone to try it themselves, to watch it for the first time. Thank you for reading.